NOTICE: All events are currently cancelled due to the ongoing Covid-19 pandemic. Events will resume as soon as it's safe to do so!

Commander is an exciting, unique way to play Magic that is all about awesome legendary creatures, big plays, and battling your friends in epic multiplayer games! In Commander, each player chooses a legendary creature as the commander of their deck. They then play with a 99-card deck that contains only cards of their commander’s colors. Also, other than basic lands, each deck can only use one copy of any card. During the game, you can cast your commander multiple times, meaning your favorite Legendary Creature can come back again and again to lead the charge as you battle for victory!
YOUR DECK
• 1 commander card (legendary creature)
• 99 other cards
• Only one copy of any card, except basic lands
• All cards must be in the color identity of the commander
THE GAME
• 2–6 players
• Free-for-all multiplayer format
• Start with 40 life
• All commanders start in their command zone
• Take turns in clockwise order
• Last player standing wins
COLOR IDENTITY
A card’s color identity can come from any part of that card, including its casting cost and any mana symbols in its text. Every card in your Commander deck must only use mana symbols that also appear on your commander. Colorless cards are allowed as well.
COMMAND ZONE
This is where your commander resides during the game when they are not in play. At the start of the game, each player puts their commander face up into the command zone. A commander can be cast from the command zone for its normal costs, plus an additional two mana for each previous time it’s been cast from the command zone this game. If your commander would be put into your library, hand, graveyard or exile from anywhere, you may return it to your command zone instead.
COMMANDER DAMAGE
A player that’s been dealt 21 or more combat damage by the same commander over the course of the game loses the game. The commander is tracked across zone changes for this purpose (for example, if one player takes control of another player’s commander, any damage that commander already dealt is still counted).
The following cards are banned from the format:
•
o 25 cards with the Card Type “Conspiracy.” Click here for list.
o 9 cards that reference “playing for ante.” Click here for list.
o Ancestral Recall
o Balance
o Biorhythm
o Black Lotus
o Braids, Cabal Minion
o Chaos Orb
o Coalition Victory
o Channel
o Emrakul, the Aeons Torn
o Erayo, Soratami Ascendant
o Falling Star
o Fastbond
o Gifts Ungiven
o Griselbrand
o Karakas
o Library of Alexandria
o Limited Resources
o Mox Emerald
o Mox Jet
o Mox Pearl
•
o Mox Ruby
o Mox Sapphire
o Painter’s Servant
o Panoptic Mirror
o Primeval Titan
o Prophet of Kruphix
o Protean Hulk
o Recurring Nightmare
o Rofellos, Llanowar Emissary
o Shahrazad
o Sundering Titan
o Sway of the Stars
o Sylvan Primordial
o Time Vault
o Time Walk
o Tinker
o Tolarian Academy
o Trade Secrets
o Upheaval
o Worldfire
o Yawgmoth’s Bargain 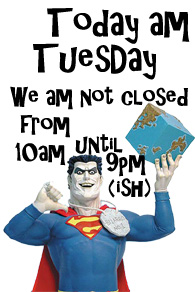 An event every week that begins at 5:00 pm on Tuesday, repeating indefinitely

An event every week that begins at 6:30 pm on Tuesday, repeating indefinitely

An event every week that begins at 6:30 pm on Wednesday, repeating indefinitely

An event every week that begins at 6:00 pm on Thursday, repeating indefinitely