In the days before time, before the world was wired together, small groups of computer enthusiasts, often referred to as “Geeks” or “Nerds” communicated in secret via a network of dial up computer connections operating at baud rates sometimes in excess of 2400 bits per second!

It was not like the internet of today, one had to actually connect a phone line to a computer and use that computer to call another computers. The computer being called had software installed called a Bulletin Board System, or BBS for short, which would answer the phone and make lots of funny noises. These computers were mainly used to play text based games ( although some games used something we called “ANSi Art”* ) and occasionally used to have a flame war** with someone named “enforcer”.
There were lots of colorful names back then, none of them real ( the roots of internet anonymity ), such as Plaid Ninja, Sir Pyscho Sexy, Criss Cross Crowe, and many more. Amongst all those colorful names was mine: Octopus. ( and Blank Knight, Bleeding Duck ( he was “shot down” ) and Bored Insomniac. )

Octopus was the name I used the most, it was a nickname given to me because of my youthful speed, as though I had eight arms to swing with. And whenever someone on a BBS which I had called would ask from whence I came, I would merely reply “The DeeP”. At this time I was selling comics at trade shows when an idea struck me, I could start with a BBS to sell comics. And since so many things within our industry are DeeP, Deep space, Deep Seas, DeeP thoughts, and since I had been telling people for years I was from The DeeP, that is the name I chose for the BBS.

It was not long after that I opened my comic store, and since “The DeeP” not only had some name recognition in the area, but also was a unique and memorable name, I decided to go with it. I have been told over the years it is a silly name, but all those people telling me it was silly remembered it.

* ANSi Art- Google it, it’s swell, or at least, it was back then
** Flame war- a series of insults which escalate until the winner is no longer friends with the sore loser. Like it’s my fault he can only use monosyllabic words. 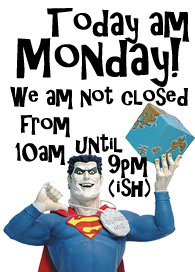